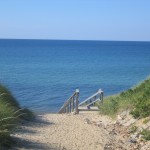 Back in August, I posted a blog commenting on the dramatic increase in sales activity in the Mid-Cape real estate market, pondering what was going on?  Well, here we are exactly 2 months later, and I'm here to tell you that in comparison to the rest of the country, we are more than holding our own!

As relates to the general real estate market in the US, Cape Cod being a resort community makes us a bit of anomaly to start with. Then you have the appeal of the Mid-Cape area in particular.  A snapshot of activity at Lomenzo Properties in the past few weeks:  Received four new listings the week of September 10 in the $400K to $700K price range - three of the four are currently under agreement.  What's going on, you might ask?  How can that be in THIS market?  We, of course, would attribute it to what we call THE LOMENZO EDGE, that certain proprietary strength that we bring to every transaction.  Beyond that, the Mid-Cape market remains strong with Buyers continuing to show up and Sellers continuing to make deals.  Since August 1, 2008, there have been 156 single family homes SOLD in the Mid-Cape towns of Dennis, Yarmouth and Brewster ranging from $145,000 to $2,375,000.  Not bad for a DOWN market!

The moral of this story is:  Don't believe everything you read or hear via the mainstream media!  We are living this real estate market every day and we can tell you that the Cape Cod Real Estate market continues to hold its own, despite the dire economic news.