We are very pleased to announce our recent affiliation with LuxuryHomes.com,  an international network to market exclusive luxury real estate.  For our clients whose properties fit the profile, this website gives added exposure of their property to prospective buyers and agents around the world for Cape  Cod luxury real estate.   Check it out at LUXURY HOMES.COM

Look for the LuxuryHomes.com logo on the left side of our homepage, part of our ongoing promise to provide "Exceptional Service Without Exception"! 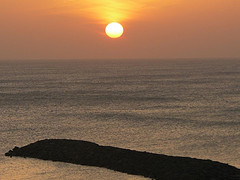 Wherever you stand on the Cape Wind project, you have to have taken note  a week or so ago,  when Interior Secretary Ken Salazar visited the Cape on an information gathering mission in regard to the project. Salazar came at the invitation of two of Cape Cod's Native American tribes who claim that Nantucket Sound, the site of Cape Wind's plans to put 130 wind turbines, each 400 feet tall, is sacred ground for their people.

The two Wampanoag tribes argued that the wind turbines in Nantucket Sound will block their view of the rising sun, an integral part of their religious observances.  (Wampanoag means "People of the Morning Light") At  6:30 a.m., Salazar joined respresentatives of the tribes at a beach in New Seabury for a ceremony to demonstrate the sunrise's importance  - a glorious, crimson show  by all reports.

After nearly a decade of review, this historic preservation issue is the final phase of the considerations of the  project - Salazar promises a decision on permitting  from the Department of the Interior by April.  It will be interesting to see what effect a Nantucket Sound sunrise will have on that decision.

The Village Tea Room at Borsari Gallery in Dennis Village

Dennis Village life has recently been further enhanced by the opening of The Village Tea Room at the Borsari Gallery.   The former home for many years of the Grose Gallery, this 1800's barn/gallery that is the backdrop for the tea room has been lovingly and exquisitely restored by its new owners, Bob & Kathy Borsari.  Each day's menu  features a homemade soup and sandwich special as well as the traditional "high tea" of petite wedge sandwiches and locally made pastries.  Such a delightful treat on these cold wintry days!

The Borsari Gallery features the unique art of noted photographer Andrew Borsari as well as former owner David Grose and various maritime artists. Best of all, you may host your next event at the gallery, which I personally have done twice!  They do a superb job with everything from weddings and engagement parties to 80th birthdays. The setting is truly memorable (as you can glimpse on their website) and the food was top notch.  Your guests will be bowled over, as mine were!

Don't miss the Borsari Gallery and  its Village Tea Room on your next visit to the Cape - this latest addition to Dennis Village is a GEM! 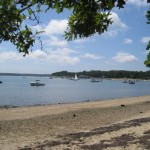 Look no further for your ORLEANS summer home!  The idyllic setting of this charming 3BR/2.5 BA property is exactly what you've been looking for.  Located on Towhee Lane, just minutes from the private association beach on PLEASANT BAY, this property offers tranquil pond views  of Deep Pond from the large mahogany deck. The deck is accessed through French doors in the home's spacious living/dining room.  The inviting first floor master bedroom overlooks the pond as well, and features a private bath and walk-in closet.  A naturally-lit open kitchen, hardwood floors  throughout and central A/C  all add to the appeal of this pondfront home.  Two additional bedrooms on the lower level provide plenty of room for family and guests.  Apply for your boat mooring on Pleasant Bay and your summer picture is complete!  Call us for more details on this exceptional Orleans pondfront home.