Here we go again!  Massachusetts is about to make history once again, this time with the first offshore wind farm in the nation.

Secretary of the  Interior Ken Salazar announced this afternoon that  the Cape Wind  Project, ten years in the making, has been been given the "thumbs up".  The government has accepted the proposal with modifications  to include:  a reduction in the size of the turbines from 170' down to 130'; requiring the developer to conduct additional marine surveys to address the impact on Nantucket Sound and to take  "other steps" to make the turbines less visible from the shore.

As stated in my previous post on this subject,  local Wampanoag  tribes are among those strongly opposed to the wind farm, in their case because of  the location  in what they term "sacred waters". We will soon see if they make good on their announced intention to pursue legal action to stop the project from going forward.

Ted Kennedy is undoubtedly turning over in his grave. 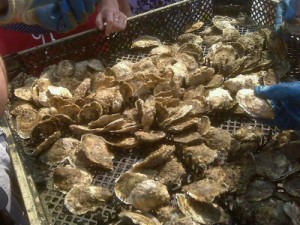 Every time we visit certain relatives in NYC, the only thing we are ever required to bring are Wellfleet oysters.  Our hosts are oyster connoisseurs and always request that particular brand.  Well, being big supporters of our fellow local businesses, we decided to surprise them with some  East Dennis Oysters.  I am happy to report that our here-to-fore Wellfleet oyster snobs were quite favorably taken by the "new kid in town"!

John and Stephanie Lowell started their oyster farm back in 2003 and their passion for the mollusks is evident in every taste. One VERY fun way to sample these succulent treats is any summer weekend at Chapin's Restaurant right here in Dennis Village, where the Lowells set up an oyster bar for your after-beach enjoyment!  Don't miss this local treat next time you're on the Cape!